Our old house is sometimes creaky.
Sometimes noisy, sometimes squeaky.
We love it still with all its quirks.
So long as all the plumbing works.

We live there happily undaunted.
Although we’re told the house is haunted.
Our guess is that it’s just a hoax.
Though spirits are elusive folks.

There’s a story ‘bout a ghost that’s told.
She harkens from a time of olde.
We think her name is Abbie Hill.
Albeit we haven’t seen her still.

See, Mrs. Hill and her loving spouse.
They used to own this big old house.
They built it as their family grew.
Way back in Eighteen-Ninety-Two.

Now why she’d rather stick around,
than head off where she should be bound.
The answer, surely no one knows.
But this is how the story goes.

The previous owners told this tale.
To us, before we closed the sale.
They saw her at their kitchen table.
They swore this story was no fable.

She sat there in a kitchen chair.
A fancy bun up in her hair.
She wore a nineteenth-century dress.
Her image had a slight fluoresce.

Then just as fast as she’d appeared.
Her ghostly apparition cleared.
It took all of their common sense.
To explain this strange experience.

Then one night as the wife was sleeping.
She awoke to find the ghost was peeping,
at her, as she lay in bed.
A sight that filled her up with dread.

But this ghost seemed not to bear ill-feeling,
as she played this game of brief revealing.
Then with a touch of Laissez Faire.
She vanished quickly in the air.

So when we heard this new disclosure.
We had to keep our strict composure.
We loved this house with all our might.
Why worry about a ghostly sight?

We bought the house with nervous laughter.
And moved our stuff in shortly after.
Wondering then, to what extent,
We’d see our ghostly resident.

But so far she has not presented.
Apparently she’s quite contented.
To share this house on old Brown Road.
This home with which we’ve been bestowed.

And now we’ve lived here many years.
Shared smiles and laughs and hugs and tears.
Regardless if we’re rich or poor.
We hope we’ll live here many more.

And if our ghost decides to show.
In all her radiance and glow.
I guess we’ll have to let her stay.
To haunt us for another day!

Most of you have read the full Ghost Story here!  If you’d like to read more about Abbie Hill, check out the link! 🙂

Do you believe in ghosts?  Here’s our ghost story… 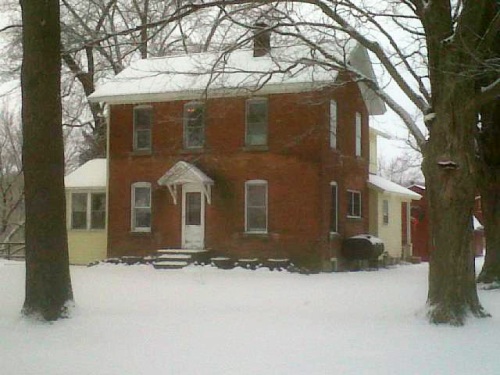 Is this house haunted?

We’ve lived in our old 1890’s farmhouse for just over 15 years.  We moved in December of 1995 and started making the place our own.  One fall evening, about a month before our closing, my wife Kim drove down to our future home and met with the wife of the couple that was selling the house to us.  She wanted to show Kim some of the quirky (but also functionally important) things about the house;  where the main water shut-off was located, how the old cast-iron radiators had to be bled in the winter, how the side entrance door (which is the primary entrance) had a tricky bolt lock, the name and phone number of the olde-tymer that serviced the boiler, and numerous other old-house peculiarities she thought we should know.  As they were wrapping up the hour or so long tour, my wife, somewhat jokingly, but also with a touch of inquisitive curiousity, asked, “so, is the place haunted?”  She was then told the story about Maggie.

According to our seller, when they had first moved in, just a few short years before, they experienced several ghostly incidences and in turn decided to give their ghost a name.  Maggie, they would call her.  Shortly after their arrival, they began renovating several rooms of the house, nothing significant, mostly fresh paint and new wallpaper.  During one incident, with no one in close proximity, a full can of paint went tumbling off the top of a ladder as they were repainting the dining room… freaky for sure, but possibly explainable.  In a more significant encounter, the wife claimed that one night as she was sitting in the three season porch, she looked over, through the dining room to a small ice cream style table that they had in the kitchen.  There, at the table, sat a woman in an early 1900’s black dress and her hair in a bun.  When she turned her head then looked back, the woman was gone.  She witnessed this woman a second time, late one night, when she awoke from a deep sleep and saw her standing at the end of her bed.  Again the visitor vanished after a few moments.

My wife Kim took these stories with a grain of salt, left for the evening, arrived home and told me about Maggie.   Being reasonable folks, we weren’t going to let a ghost story affect the sale of the house we had fallen in love with.  The sale progressed over the next month and we moved in just before Christmas of 1995.  A few days after carrying our furniture and our boxed-up life into our new home we took the five-minute drive over to the neighboring Christmas tree farm, cut down a Christmas tree and began making our own memories.

For the record, I don’t really believe in ghosts.  I just think that if they were really spending time with us we’d have more evidence of their existence.  But somewhere deep inside my psyche is a sliver of belief.  I’m not sure why… I guess I kind of want to believe in ghosts.  I find the prospect of it fascinating.  I think the historical significance of ghosts makes for great stories.  I’m a huge fan of the hit TV show Ghost Hunters.  But in reality, I’m mostly a non-believer.  And also for the record, we have never seen or met Maggie.  Have we had some ghostly experiences?  Sure, most old house owners do.  I think that’s a function of houses that settle, that have leaky windows that make ghoulish sounds as the wind sneaks through the cracks and that have older electrical systems.

Early on we had a light in a downstairs bathroom that would turn on by its self.  One morning, after witnessing the light go on as I sat in the adjacent room, I went into the bathroom, neck-hair standing straight up, and discovered the old light switch was just loose and if it wasn’t pushed down completely when the light was turned off, a few minutes later it would pop back up and voila… the light would go on.  One evening as were getting ready to head upstairs for bed, as I approached the stairs I saw the perfectly shaped shadow of a man’s head on the opposite wall.  Yes, it stopped me in my tracks and raised my hackles!  But after a little investigation we found the source, just a light reflecting off the mirror on the opposite wall and creating a shadow from some items sitting on our dining room table.  Even this past Friday, New Years Eve, as I sat at that same dining room table, working on my recent blog posts, I clearly heard my first name spoken in what I swore was my wife’s voice.  But my wife was at work on that Friday.  “Is Kim home early”, I thought, trying not to be totally freaked out.  I called to my daughter who was in the kitchen and asked, “Madeline is Mom there?  I swear I just heard her say my name.”  “No”, she said, and then proceeded to tell me she thought she had heard HER name in that same area just a week or so earlier, in a kind of quiet, hushed voice.  CREEPY!!!  Do I have an explanation for those events?  No, I guess I don’t, but when I heard what I thought was my name, my son and one of his friends were running around just upstairs.  It could have been anything, a noise they made, a sound from their active playing.  Same with Madeline’s experience, not enough evidence that it was a real paranormal event.  Spooky… yes, paranormal… probably not!

However, if there is a Maggie, we have decided that she must be okay with us living here and is, for now, happy to keep to herself.  She apparently must be satisfied with us as the current caretakers of her house old farmhouse on Brown Road.  We have since done some major renovations to the house (a common ghost aggravator) but still have not met or seen our theoretical guest.  That makes us feel better about the possibility of having another resident amongst us.  And if it turns out there really is a Maggie, I think I know who she is.

One other significant tidbit of information we discovered from the sellers is that they had heard that our house had at one time, back in the late 1890’s and early 1900’s, operated as a Post Office for the few local residents in the area, at the time known as the Mint District due to the local farming and production of mint flavoring.  Several years ago I began to do some research on the history of our home and discovered that the Post Office story was true.  From the book Water Over the Dam, a history of Vicksburg, Michigan, published in 1972 by the Vicksburg historical society, I found the following excerpt:

At about this time (1891) a post office was established in the Mint district (there were five mint stills in the area), through the single-handed efforts of Mrs. Abner Yorton, (maiden name Abbie Hill) daughter of Cornelius Hill, mother of Mrs.  Mabel Godshalk.  Mrs. Yorton, the busy mother of five children, grew tired of driving to Vicksburg twice a week to pick up mail for herself and neighbors.  She contacted the Post Master General who told her if one letter a day was mailed from her area for a period of six months, the government would establish a post office there.  As Mrs. Yorton’s husband was a traveling salesman who traveled throughout the United States, she wrote him a letter every day for the six months, drove into Vicksburg and saw that it was properly postmarked.  The post office was established on June 30, 1890.

Having this information in hand, with names to boot, I was able to track down more details about this family, whom as best as I can tell, were the original owners of our home, and ultimately came upon the photo below which was given to me by a distant relative who had posted some of the family history on a genealogy website. 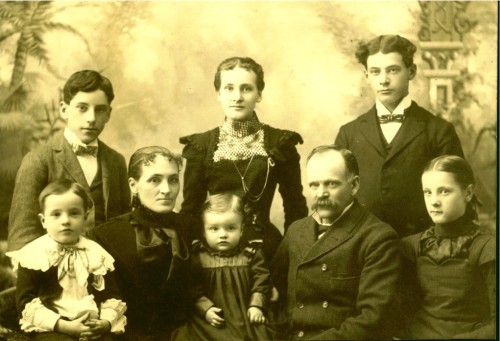 Apparently the Hill Family was prominent in our rural area during this time period and many members of the family and their relatives are buried in the small cemetery just ½ mile or so up the road from us, including the baby in the center of the photo who died as an infant (thus the mention of only five children above).  The older man in the photo (3rd from the right) is Abner Yorton, the salesman mentioned in Water on the Dam.  The older woman (3rd from the left) is Abbie Hill… in her early 1900’s black dress and with her hair in a bun.  Is Abbie Hill our Maggie?  Is there a reason she is possibly still lingering about our house?

For now, I’ll assume that Maggie is nothing but a far-fetched ghost story and that Abbie Hill is currently “resting in peace” in her final burial place.  If the time comes though, when Maggie decides to introduce herself to us… well, that will make for one hell of a blog post!