Don’t swear at your lawn mower

I swore a lot at my lawn mower yesterday.

I was trying to get the grass cut as it was quickly reaching Amazon Jungle heights with all the rain and cool weather we get this time of year.  When the grass is too long, especially in the spring, the wood ticks come out in force and start looking for some fresh blood to suck… on us or our dog or on our goats.  Plus I hadn’t had a chance to cut it yet and unfortunately my delusional dream that the two goats would keep the grass all nice and trimmed and tidy just isn’t panning out.  We have about three acres and apparently goats can only eat so much grass.  Who knew?  Maybe Jack will be able to help.

I was reminded of a story about an old friend of my family’s, long since deceased, who cut off all his fingers on one of his hands in a lawn mower accident.  Since he could no longer mow, he purchased a bunch of sheep and kept them in a portable penned in area, which was periodically moved around the property in order to keep his grass mowed.  Genius!

Anyway, my lawn mower is reaching the end of its life.  It’s having lots of health problems.  I won’t list all the details, just know that the list goes on and on.  I could probably fix it all, but when do you just say, enough is enough and pull the plug on the life support.  I bet Dr. Kevorkian doesn’t have any trouble replacing his lawn mower.

But it’s had a good life.  I bought it used for $600.00 from a guy about 12 years ago.  He had already been using it for about 10 years himself.  It’s one of those big commercial style landscaping mowers and I walk behind it.  I like to walk because it’s good exercise and helps keep me in shape.  It takes about four hours to cut the entire property and although as a younger, strapping guy I used to do it all at once, now I try to split it up into 2 hour shifts, a couple of times a week.  I figure this mower has been cutting grass for about 20,000+ hours over its workhorse life.  But now it reaching the end and I’m not sure its worth putting any more money into it.

So I swore at it a lot yesterday…

Then with the property only partially cut, I gave up and parked it back in the barn.  I went back into the house and was overcome with a massive wave of guilt.  This poor selfless machine which has given me so much over the years, was out there limping along, simply trying to cut the grass for me even though it’s poor, broken body was failing miserably under the weight of age and hard-physical work… and all I could do was swear at it. Nice going…

Anyhow, after cooling down, I got on Craiglist to see if anyone in the area had a lawn mower for sale.  I found this one listed for $650.00 from a guy that’s only about 1/2 hour away. 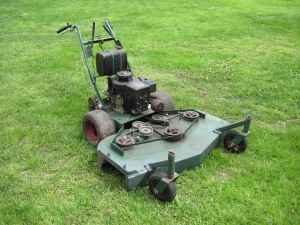 Isn’t it beautiful?  This is the exact same lawn mower as mine, except it’s newer.  It’s about 12 years old, roughly the same age mine was when I originally bought it.  Assuming it’s still available, I figure I can talk the guy down to $600.00 and get another 10-12 years out of this one.  As Yogi Berra said, “it’s like Deja Vu, all over again!”  I can keep the old mower and maybe use it for parts.

Then it won’t feel sad.

30 responses to “Don’t swear at your lawn mower”