What books are you reading? 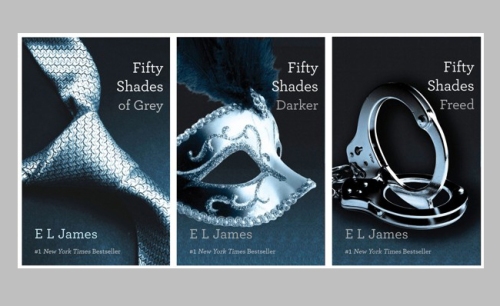 Men across the globe are praising the Fifty Shades of Grey series of books for the increase in their sex lives the books have provided as these sensual stories have been devoured by female readers.  If you are not familiar with the Fifty Shades of Grey books, well, apparently the two main characters have sex… ALL. THE. TIME! In any case, nothing like a little literary fantasy to get people revved up.

In the past, other series of books haven’t worked out so well…

Prior to the Fifty shades of Grey series, the Hunger Games books were topping the charts. Now granted, I read the first one and I thought it was a very good book. But in all honesty, horrible, desolute poverty and kids killing each other just doesn’t put people in the mood. I mean, the average guy could spend hours out in the woods collecting and preparing stuff for a romantic dinner of stale bread, roots dug out of the ground, nuts and berries, mice and squirrel meat and porridge, his hands dirty and bloody from digging in the soil and tearing meat from bone… only to have his wife crush all his dreams when she walks in the door with a pizza and six cartons of Chinese food. It would be enough to want to fire an arrow through her heart. Not very romantic.

Before the Hunger Games, most women were, of course reading the Twilight series of books and men were thinking, “this is it, a sexy vampire story, I am so in, I just need to spend a lot of time down in my basement so I can get that pale white skin!” Plus, the average, grunt-speaking man had to learn to talk in short, breathy sentences while staring off into space and saying things like “you are utterly indecent — no one should look so tempting, it’s not fair” and “yes, you are exactly my brand of heroin.”  Of course, if a guy was able to master those things, he had to attempt to move through rooms at light speed while shirtless and wearing tight pants.  This of course came with the high risk of knocking himself out while tripping over the unused exercise machine and flying head first into her nightstand.

Then, who can forget the Harry Potter years, when women wrapped their vivid imaginations around wizards and magic. It seemed like those years went on forever, but most men thought, “what could be sexier than a guy in a wizard costume with a pointy hat?” Sales of those little circular glasses went through the roof and men interacted with their wives by saying things like “woulducus likto havicus sexicus” and “engorgio erecto, can you takus carathis” while simultaneously opening up the black cloak that they were wearing as a bathrobe.  Apparently women didn’t find any of this arousing in the least.

So, now that the Fifty Shades of Grey books will slowly fade from the best seller list, men around the globe are concerned about what books will become the next craze. As most men don’t follow the best seller list and/or know what’s popular maybe you female readers can help us figure out what we can look forward to next!

35 responses to “What books are you reading?”