“Once there was a peddler who sold caps. But he was not like an ordinary peddler carrying his wares on his back. He carried them on top of his head.”

So begins the tale of the peddler who sold caps in the famous book “Caps for Sale” by Esphyr Slobodkina originally published in 1940.

Those of you who read regularly might know that I am a sales rep. Having been in my industry in both the capacity as a buyer and a salesperson I feel qualified to give some input to those that are considering a career in sales. You could read “Sales for Dummies” or “Mastering the Art of the Sale” or one of the hundreds of other salesmanship books out there.

Or you could just read “Caps for Sale”.

Here’s why… see my in-depth analysis below.

Situation 1. Our main character is a peddler who sells caps. He walks up and down the road trying to sell to customers.

Quote from book: “He walked up and down the streets, holding himself very straight so as not to upset his caps. As he went along he called, “Caps! Caps for Sale! Fifty Cents a Cap!”

Analysis: A good salesperson, as this man is, knows that his appearance is one of the most important tools in sales. He is dressed professionally and he keeps his goods very organized and well-kept on his head. He is self motivated, works hard and has a very competitively priced product which he can deliver on the spot. He is implementing one of the simplest of sales tools; fill a need. People need caps… he has caps.

Situation 2: One day the peddler just couldn’t sell any caps. So he decided to take a walk into the country and found a nice shady tree and took a nap.

Quote from Book: “One morning he couldn’t sell any caps. He walked up and down the street calling “Caps! Caps for Sale! Fifty Cents a Cap!” But nobody wanted any caps that morning. Not even a red cap.”

Analysis: Sales can be very rewarding some days and very frustrating other days. Even the best salesperson will have days when he just can’t sell anything. The peddler understands that a good salesperson is always planting seeds whether he has made a sale or not. Those seeds often grow into positive relationships with customers. He also knows that on some days  he’ll run into rejection after rejection after rejection. On those days it’s often easier to just take a nap. 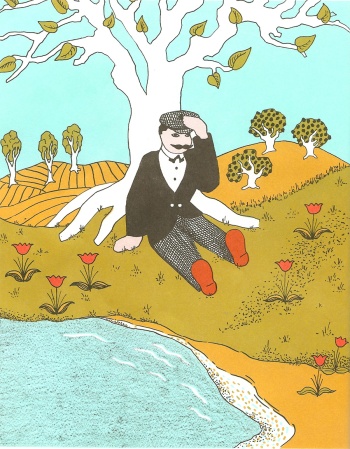 Situation 3: When the peddler woke up he realized he had a serious problem; all of his caps were missing.

Quote from Book: “He looked up into the tree. And what do you think he saw? On every branch sat a monkey. On every monkey was a gray, or a brown or a blue, or a red cap!”

Analysis: A good salesperson knows that success will often involve overcoming significant challenges. The peddler knows that he needs to be very detail oriented and constantly at the top of his game. Even though the peddler felt it was okay to take a short break from working, from past experience he quickly remembered that inevitably, if he is not paying attention, something will go wrong.

Take Home Thought: It’s okay to occasionally sleep on the job but be prepared for the consequences.

Situation 4: The peddler got up from the ground and knew that he had to address the situation.

Analysis: A good salesperson knows that he will sometimes be confronted with a problem, either with a corporate colleague, another rep, or a customer.  When that happens, its best to find a prompt solution that will minimize damage and that is suitable for all parties involved. A good salesperson also knows that to reach an adequate solution to an issue it’s best to have a face to face conversation rather than hiding behind e-mails or texts.  Phone calls are adequate if there is geographical distance between the parties.

Situation 5: The circumstances quickly spiral out of control. The peddler shouts at the monkeys, shakes his finger and stamps on the ground in an attempt to get his caps back. But the monkeys only mimic him back.

Quote from Book: “You monkeys, you” he said, shaking a finger at them, “you give me back my caps.” But the monkeys only shook their fingers back at him and said, “Tsz, tsz, tsz.”

Analysis: A good salesperson knows that when attempting to resolve a problem, what begins as a reasonable approach can quickly disintegrate into an epic battle of finger-pointing, stamping feet and abrasive language. Even though the peddler knows this will only cause the monkeys to become defensive and act in the same aggressive and condescending manner, he let’s himself fall into this misdirected method of conflict resolution.

Take Home Thought: Remember the old cliché, “you will catch more monkeys with bananas than you will with vinegar. Monkey’s hate vinegar.” Don’t let anger get the best of you.

Situation 6: The peddler gets so fed up that he throws his hat on the ground in anger. In response to this, all the monkeys throw their hats on the ground as well and he is able to collect them all up.

Analysis:  A good salesperson knows to take advantage of any situation that ends in a positive result whether the positive result was intended or not. Although the peddler knows his approach to solving this particular problem may not have been his finest moment, he can now put this one behind him and get back to his primary role… selling! 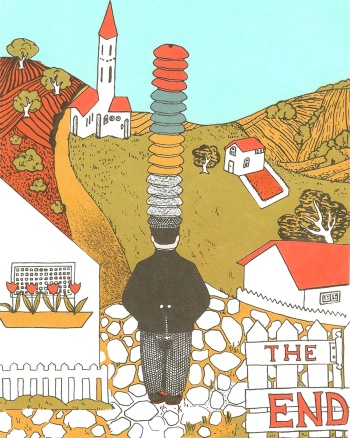 Situation 7: The peddler regains his composure and gets back into the sales field, working hard, filling needs and building relationships.

Quote from Book: “And slowly, slowly, he walked back to town calling, “Caps! Caps for sale! Fifty cents a cap!”

Take Home Thought: Never Give Up!

So there you go, pretty much all you need to know about sales.

And in the worst case scenario… sometimes it’s easier to just take a nap.

Reblogged from the Journal of the Academy of Primate Behavioral Studies

Psychologists and Child Development researchers have been analyzing data on the long-term effects of spanking your children for over six decades. The conclusions derived from this intensive collaboration is that parents who spank their children risk causing long-term harm that outweighs the short-term benefits of child obedience.

With this crucial information at hand, we at the Society for Primates And their Natural Kin (SPANK), a worldwide think tank promoting the proper treatment and care of pet monkeys and other primates, had long believed that adequate research was sorely lacking on the long-term effects of spanking your monkey. Now we understand that the proliferation of owning monkeys as household pets has been declining since its initial growth period during the 1940’s, with the popularity of the Curious George series of children’s books, to its peak in the late 1970’s – early 1980’s, when the hit Television show “BJ and the Bear” was airing.

Still, although solid data has been difficult to obtain about monkey ownership, our research suggests that there are over 100,000 homes with pet monkeys in the United States alone, a significant number, albeit a small percentage of the overall world population of pet monkeys. Said lead SPANK researcher Jacque D’Auffe, MD, PhD; “We honestly believe that the estimate of roughly 100,000 households with pet monkeys in the United States is on the low side. But as you have probably inferred from a multitude of television series, movies and books, monkeys have historically been troublesome little critters to keep as pets, with Curious George being a prime example. So when you look at those kinds of numbers and factor in the significant behavioral issues that most monkeys bring to the table, as an organization, we were terribly concerned that there could potentially be lots of folks out there spanking their monkeys.”

“We believed we needed to address that situation” added Chinese Animal Psychologist and SPANK Research Fellow, Wai Xing Mi Dong, PhD. “We knew that children, who are spanked on a regular basis in a structured situation of corporal punishment by their parents, tend to become aggressive, delinquent and have mental health problems not only in childhood, but into their adulthood. Why had we not correlated that the aggressive, delinquent and mentally unstable behavior that monkeys often present is not a direct result of people spanking their monkeys?”

According to SPANK spokesperson Jill Initoff, the organization believes that civilized societies in general need to re-evaluate why we believe it is reasonable to spank our monkeys or any of our pets for that matter. Said Initoff, “in thousands and thousands of interviews we have found links between spanking and a variety of negative behaviors or experiences, including aggression, anti-social behavior and mental health problems.”  The one positive result of spanking that she identified was quick resolution of the situation at hand.

“Sure, spanking may bring an immediate result and may seem like an easy solution” she added. “Our studies suggest, however, that over the long-term, spanking does not result in any positive behavioral changes. Perhaps more importantly, those who are doing the spanking, often feel significant feelings of guilt and remorse which can have long-term consequences of its own.”

A few major Animal Rights organizations, including the Organization for the Optimal Handling of Animals Holistically and Humanely (OOH AHH), have taken an official stance against corporal punishment by pet owners, especially against monkeys which have a tendency to respond in a much more negative and aggressive fashion when spanked regularly.

Said OOH AHH President Hans Jobbe, “when a pet owner is in a situation where they’re considering spanking their pet, especially if that pet is a monkey … stop for a moment — count to 10, whatever it takes.” Jobbe cautioned that his findings do not imply that all monkeys who are spanked turn out to be aggressive or delinquent. But he contended that spanking, on its own, does not teach a pet monkey right from wrong and may not deter them from misbehaving when their owners are not present.

“In conclusion”, said D’Auffe, “SPANK researchers have concluded that until pet owners and more specifically, pet monkey owners, can legitimately conclude that spanking your monkey does not have negative long-term psychological effects on both the animals and those doing the spanking, we cannot condone spanking your monkey as a responsible method of behavioral control and reinforcement. As an organization, we have been implementing significant efforts to discourage having monkeys as household pets as we believe, like all exotic animals, monkeys were meant to live and thrive in the wild, not in people’s homes.

Added Initoff, “as long as we continue to witness a significant decrease in the glamorous representation of monkey ownership through books like the Curious George series, movies and television shows like BJ and the Bear and the pet monkey Clyde, in the Clint Eastwood movies, we believe we should also continue to see decreases in the prominence of monkey spanking.”

Ummmm… what did you think they were talking about??