Naughty, can you please get the newspaper?

I’m a pretty technologically saavy guy, spending lots of time connected to a computer keyboard or my blackberry. I’m a Facebook addict… and now I’m a blogger. But I’ve always enjoyed reading a newspaper, you know, like a real one, that’s actually made out of paper and that stains your fingers black if you spend enough time browsing the pages. Even though our local paper continues to shrink as the digital age consumes it readership, I still enjoy a physical newspaper.

Growing up, when my family lived in New York, my Mom worked for years in New York City and would commute on the Long Island Railroad from the Smithtown train station all the way into Manhattan and back every day. For one month during my senior year in college I worked an internship in the city and we would commute in together. I still remember her joking about how the businessmen on the train had this incredible skill at opening and re-folding and re-opening and re-folding the New York Times, like some giant origami project, so as not to disturb the neighbor trying to sleep in the seat next to them.

I haven’t been on a commuter train like that in probably over two decades so I can only imagine that the riders on today’s trains are reading the news on the array of handheld devices available today or the Kindles, iPAD’s and other tablet readers rapidly breaking into the market. That’s progress and in the long run, I believe it’s a good thing.  I won’t let myself be one of the nayayers that gripe and complain about technology taking over our lives. I enjoy it and I thrive on the instant access we have to information, to each other, to the world!

Ahh, but enough of that city life stuff…

Back in late spring we adopted two goats from the horse farm where my daughter takes riding lessons. The farm was planning on getting rid of the goats and we decided this might be good practice for our daughter if down the road we decide to get her a horse. Our goats are both billies and they both came pre-named. The one on the left with the horns is named Heath, the one on the right is named Naughty. Uh… HELLO… that should have been a clue right there! Actually as it turns out they are both darling animals and we have all grown quite attached to their quirky and “naughty” behaviors.

Until I have time to get our pasture fences secured so the goats can’t sneak right through the slats, they have free reign of the property and for the most part they choose to stick around and not wander too far. I guess they know “the hand that feeds them” and maybe goats in general just aren’t wanderers. Goats are eaters however and apparently one of the things they enjoy eating is…. you guessed it, newspaper!

So, shortly after the delivery driver drops by each day, Naughty likes to “get the paper.”  If we don’t notice it’s arrived first, it typically ends up like this: 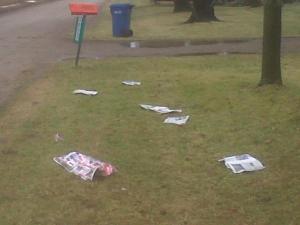 Next time could you deliver it to the front door?

Maybe I should have asked Santa for a Kindle this Christmas!!

4 responses to “Naughty, can you please get the newspaper?”