Well, because Ralph Brown lived there of course.  We live in an area where we are surrounded by properties that are still actively farmed, and farmed by families that have been in the area for years.  Several of the roads around us are named after residents of the area, many of whom still live in the old homes that have housed generations of their families.  Heikes Road, Lowe Road, to name just a couple… and of course Brown Road.

Our old farm house has a different story.  She was built, we believe, roughly 120+ years ago around the early 1890’s.  From what I can tell the property was once part of a much larger parcel that at one point was cut down to just the three small acres we currently own.  Our house has also been the residence of many familes over the recent decades.  Quite some time ago I spent a  day at the county courthouse building doing a little research on the property transfers that our place had gone through.  We have lived there now for roughly 15-16 years and are the longest residents since the 1970’s.  I don’t have an answer to why that is, I can only speculate that circumstances for many of the families for many years forced the residents to move on.  The folks we purchased the home from back in 1995 claimed that they had seen and experienced several instances of a ghost in the home, an elderly woman dressed in late 1800’s, early 1900’s clothing and at least in one instance, sitting at their kitchen table.  They called her Maggie and although that could surely be a reason for high turnover of a property, we have never seen or met Maggie.  So I guess the 25 or so years of families moving in and out was just an anomoly in the 120+ years of our home’s existance!

But before all that, there was Ralph Brown.  I have done some research on our house and have dug up some interesting tidbits of it’s history.  But I have not been able to find any information on Mr. Brown!  I do know several neighbors that knew him and remember him, and clearly he and his family resided in our home long enough to have the road named after them!  He is also buried down the road in the local cemetery (see image below), but other than that my research on the family has dug up nothing of any significance.  I have asked all the neighbors if they have any old photographs of the Brown’s or photos of the home when they lived there, but have come up empty.  I do know they are not the family that built the home and there is a fascinating history of the family that came before the Brown’s, the folks that I believe built our home, which I will delve into in another post. 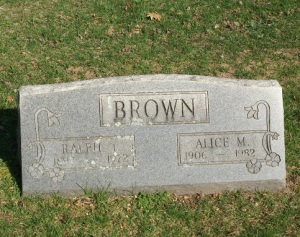 Until then, I still revel in the idea that we live on Brown Road, named after this elusive character named Ralph Brown.  As time permits, I’ll keep digging, trying to find some information about this fellow and his family who were the caretakers of our old home for so many years.  Now we are the caretakers and are making our own history.  Perhaps someday we’ll live there long enough that they change the road’s name to “Warner Road”!

One response to “So why is Brown Road called Brown Road?”