Once upon a time there was a mad mud moon man. He lived in a garbage bag and he came out every night. Every weekend he came down to earth. One weekend when he came down, he went to a farm-yard for dinner. The farmer looked out the window and the farmer got up, ran over and got his gun, picked it up, ran out the door and started shooting at him but he got away. Every weekend the mud monster would come to the farm but every time he’d get scared away. One day the farmer called fifteen hunters. All fifteen hunters went. A week went by and still no sign of him. All of a sudden five of them heard footsteps. They all split up. They got back into a group again. They were still hearing footprints. All the sudden five mud monsters came walking at them. All fifteen of them pointed their guns at the mud monsters. All fifteen guns went and there was five mud puddles laying out in the woods. 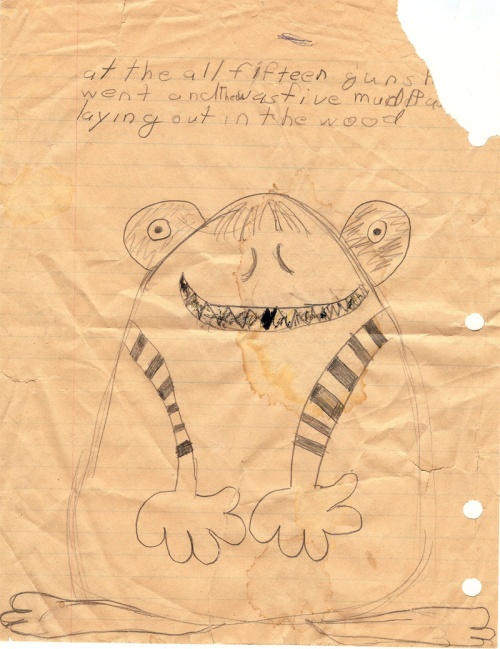 I found this today while digging through some files.  My mother had saved it and given it to me many years ago when she was culling stuff out of the house.  I had to clean up some of the grammatical issues up above, but clearly my awesome and worldly writing talents started at an early age!

My kindergarten teacher was named Mrs. Smiley… at least I think it was. That’s one of those “facts” that I have burned into my memory that I will never forget, but there’s no way to verify whether that’s  true or not. Maybe we just called her Mrs. Smiley, because she was happy or something… but that’s not as appealing a tale!  So I’ll stick with the story that she was named Mrs. Smiley. I don’t know if I wrote this in Mrs. Smiley’s class, but clearly with a name like that she must have had a positive influence on my academic career!

When did you seriously start writing? Do you still have any of your early stories?

21 responses to “My Humble Beginnings”