Of Anniversaries and Birthdays and Mid-Life Crises 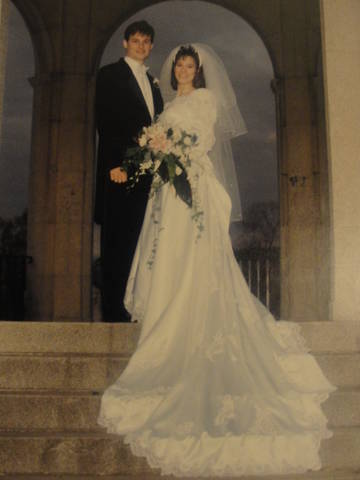 Today my wife and I celebrate our 20th wedding anniversary. Kim and I met at Colby College in Waterville, Maine in 1986. We got married in North Reading, Massachusetts, her home town in 1992. Our reception was at the Hawthorne Hotel in Historic Salem, Massachusetts. We moved to Michigan in July of 1993 and bought the home that is the theme of this blog in December of 1995. Two children, several jobs and lots of pets later, here we are celebrating 20 years as husband and wife.

Ours is not a perfect marriage, none are. But it’s pretty close. We’re very similar people and we like each other. Yes, I specifically used that word… “like”. We like each other, we’re friends, we get along, we know when it’s okay to talk to each other and we know when it’s best to leave the other to themselves. That old adage that opposites attract should be thrown out the window. Opposites don’t attract… well, perhaps they attract, but do they last?  People that are the same, that have the same interests and personality traits have relationships that last. Sure, we are in love too. But “love” is one of those vague words that has so many levels of meaning. It’s a word for young people testing the waters of newly discovered relationships. It’s a word for romantic’s spending a week in Paris or watching a sunrise on the beach or picking daisy’s in a field. It’s a word that’s important in our lives, but when it comes to a successful marriage words like friendship, commitment and loyalty should trump the word love any day. When you’re raising kids and trying to pay a mortgage and thinking about college years… you better be friends… you better be committed and loyal… and you DAMN WELL better LIKE each other!  So, to my wife, if you are reading this… I may love you… but I really LIKE you. Thanks for being my best friend.

Today is also my oldest brother’s 50th birthday!  This is quite the milestone day! I have two older brothers, both of whom I look up to tremendously and who have been friends and mentors to me. Unfortunately they both live far away and I don’t get to see them that often. But they are important in my life and I wish the oldest the happiest of 50th birthdays today.

I have to admit, as I sit here and type this morning, all these large numbers, 50’s and 20’s make me feel old and throw me deeper into my so-called mid-life crisis, which I have written about periodically and that I suspect I’ll be dealing with for the rest of my life. Mine is not the traditional mid-life crisis of fast sports cars and yachts and trips to the Caribbean. It’s more of a “can I check the fuck out and become a quirky, long-bearded homesteader who raises bees and writes poetry and doesn’t have to deal with the daily shit storm of life?” But that’s not very responsible and fortunately (or perhaps unfortunately) I am a mostly responsible guy and understand that’s not a suitable option at this stage of my life.

Plus, I’m not sure my wife would “like” me anymore!

24 responses to “Of Anniversaries and Birthdays and Mid-Life Crises”