Looking for the Idyllic Life

This is one of my very first posts and the one that deserves credit for giving me the impetus to start Brown Road Chronicles.  It is one of my favorites and if you have not read it yet I hope you enjoy it.  I have updated it slightly from its original state and added some images. I will let you all know that although I can’t claim to have “found the idyllic life,” I believe the writing of this blog and the soul-searching that has entailed, has brought me several steps closer to whatever I will ultimately discover that it is. Thank you all for reading.

‘m looking for the idyllic life.  You know, like the people in “Country Living” magazine? There are always folks in that magazine who live in these great old houses out in the country. Houses that they’ve beautifully restored to their former glory. Seems often they are people who spent some years in the rat race of life and decided to get out, and now they are self-employed working from their home, or they’re writers, or furniture makers, or beekeepers or they’re doing something else that none of us other less fortunate, dim-witted people would be able to make a living doing. Occasionally they’re older folks, but sometimes not. Just as often they’re people like me, middle-aged, with kids that they’ll eventually have to put through college, and sometimes (probably in higher proportion than the general populace) they’re same-sex couples. But regardless, it all looks so glorious in the glossy pages of the magazines; the rustic antique furniture; the beautiful, manicured gardens of fresh veggies and flowers; the dining room table all decorated in fancy holiday display; the pet dog sleeping peacefully on the wraparound porch. Can you envision it? That’s what I want… not this working my ass off lifestyle, toiling away every day, only to someday eventually be able to retire once I’m too old for it really to matter anymore. That’s what I want… the idyllic life… straight from the pages of “Country Living” magazine!

Many of you know I have an old farm-house out in the country, 120 years old roughly. I’ve even renovated a bunch of it, so much so that I actually got sick of it for a while and have taken several years off. But there’s still a million things to do. My 10-year-old son’s bedroom has nursery wallpaper in it, leftover from the previous owners. The three season porch (uh… storage room) is loaded with lead paint and windows that let plenty of cold air in… and the list goes on and on. We’ve even got some nice antiques, they’re hard to see sometime because they have all of our stuff stacked on top of them, or they’re covered in clothes like some kind of pseudo clothing rack. We planted a garden several years in a row. It went from about 100 ft. to 50 ft. to 25 ft to zero feet as we realized how much effort it took to keep it maintained. We have the pets too, a dog, cats, a couple of goats and even a horse that we are currently boarding at another farm while we work on getting our horse stalls and pasture fences repaired. There’s enough pet hair in the house to knit sweaters with.  Ahhhh, maybe that’s the idyllic career… cat and dog hair sweaters… but alas, too many people are allergic. Then there’s the overflowing laundry, the broken dishwasher, the……

The glossy, magazine-delivered illusion is that somehow these people have simplified. They have time… free time, and apparently loads of it.  Yet they still have all the monetary and commercial needs that the rest of us indulge in. There’s an imbalance there that I can’t quite grasp my hands around. Is it just some rogue scheme to get us to read the magazine? I suspect that I can’t really make a decent living as a beekeeper, yet still be able to throw lavish champagne brunches in my backyard with fancy tablecloths and fresh picked greens from the garden. Damn you, “Country Living” for teasing me into believing this can be a reality. 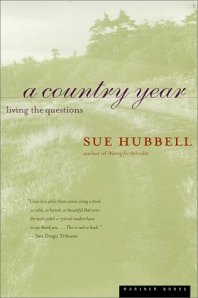 There is a great book that I like to read called “A Country Year” by Sue Hubbell. I don’t think I’ve ever read it straight through, but have easily read the whole thing several times over in bits and pieces. Ms. Hubbell (who it turns out was born and raised near me) was at one time a librarian at Brown University in Providence, Rhode Island. She was married to a professor and was living what any of us would likely consider a wonderful, upscale lifestyle. When the grind eventually got to them, they left their jobs, bought a farm in the Ozark Mountains of Missouri and started a beekeeping and honey producing operation. Soon after, her husband left her, but she continued to run the business, living what can only be described as an “idyllic” and simplified life in this stunningly beautiful area of the country. The book is broken down into small essays describing her days in this rural community throughout the four seasons of the year; her interactions with nature; her challenges surviving through brutal winters; her relationships with her Ozark neighbors; her developing self-sufficiency. Over time she nurtures the business into one of the largest honey producers in that area of the country, yet it still never drives enough revenue to eliminate her money worries and she describes her income as “below the poverty level.” Now in reality that’s what I would call “Country Living”, it’s just not the glossy magazine kind!

So, I’m now searching for the “idyllic life.” As I look closely the infrastructure is all there for me; a

beautiful, loving family, the great old house in the country, the antiques, the pet dog. So, why isn’t it idyllic, like the magazine says it could, or should be? What is missing? I don’t know! What really is the idyllic life? Is it living as a beekeeper with an income below the poverty level, but “stopping to smell the flowers” and living a mostly stress free lifestyle? Or is it sitting hunched in an office cubicle 40-80 hours a week, working towards the weekends and those elusive days off when you can throw those champagne brunches. Or is it having a house filled with stuff… flat screens, WII’s, iPODs… stuff that in the long-term really doesn’t provide anything other than a temporary feeling of satisfaction and success. It’s one of those questions that if you asked one hundred people, I am sure you’d get one hundred different answers. I for one – as the clock of my life rapidly tick-tocks along, as my wife and I watch our children growing up faster than we could have ever imagined, as we see the older generations of our family passing on, as I grapple with the short time we have on this earth – am starting to lean toward the bees.

Problem is… I’m afraid of bees.

… and maybe we better cancel the “Country Living” subscription.

13 responses to “Looking for the Idyllic Life”